Part of the beauty of chess is based on the almost limitless possibilities that arise over the board. You have eighteen choices to make on your first move alone, counting each pawn twice since they can initially move either one or two squares. Black then has eighteen replies from the silly h6?! up to the proven nudge of their e-pawn forward one square. The number of possibilities expand exponentially. So how can we build our openings when we rarely see the same move sequences twice?

I think that organizing your openings according to what you want to do in the middlegame is the common-sense approach. I’ll endeavor to show you how to do this through a series on this blog. First I think we should look at how I derived my current repertoire by going back a few years to when I first learned the game. My errors in judgment, at the board and away, will be instructive. Hopefully the gentle reader will excuse the many blunders and oversights from the earliest games. Forgive the novice, for he knows not what he does!

When I first began to play chess I chose the Dutch Defense as black (1. d4 f5). The wild and wooly defense involves pinpoint calculation and a willingness to thrust the pawns forward in front of one’s own king. It is very advanced and adopted only rarely as the main component of d4 defense. How did I decide to adopt this as a beginner? Easy, I looked at the master games of Botvinnik and I watched him dismantle his opponents with aplomb! I wanted to play in an unorthodox fashion and create feats of derring-do on the board. I liked interesting positions like this one from the Leningrad Dutch: 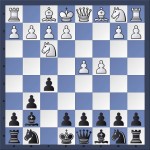 Black has made three moves and already has weaknesses in his camp. He will have to play actively or he will have extensive problems with his king’s safety. Without a positive plan to proceed white’s advantage will become substantial. This opening is not for the faint of heart. It requires an understanding of the imbalances of the chessboard that I did not possess! So today’s lesson is stay within the scope of your current capabilities. Stayed tuned until next time where we’ll dissect things a bit further.