Thanks again to Tim Krabbe and his excellent list of chess brilliancies. The move in question is the the last chance to convert the win, and it cements Bronstein’s legacy as an uncompromising, stylistic genius. 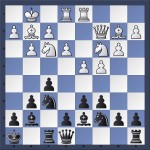 In a sense this delayed Dutch is already a brilliant game. Black controls the center with a seemingly fragile mix of pawns and pieces. He’s about to play the odd Rd8 to provide more protection to d5. Despite the cramped nature of black’s game white has a difficult time making his space advantage count. Bronstein is careful to avoid passivity at all times. 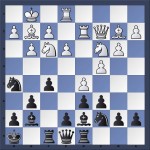 Black plays 15…Qf7! If you look closely you can see that black, through accurate piece placement, actually has better control of d5. The knight doesn’t count as a defender because it can be eliminated. Black will have to respond to the check afterwards but he should be able to hold onto d5. White must cede control of this important square. Watch how his position slowly erodes from this point forward. 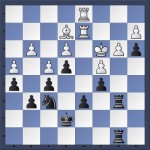 42.Rd5!? White is struggling. He has the worst minor piece and his rooks can’t find good spots. He realizes that his heavy pieces are terrible and that black’s knight is easily better than either of them. He tries the exchange sacrifice banking that black, with no pawn levers, will eventually have to sacrifice the exchange back to have winning chances. This shows great strategic awareness. Black doesn’t bite of course, but it was worth a try. 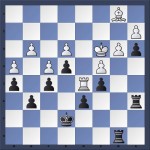 Well, it looks like after 48. Rxd5 the game is a clear draw. Not in Bronstein’s book. Can you spot the killer variation and the idea behind it? After 48..Rxb3!! and the ensuing rook penetration black’s pawns give more than adequate compensation for the piece. Although white puts up a stout defense the triple connected passers roll right on down the board.