As my chess mysteriously worsens I have started not to think in terms of wins and losses, but to steer towards interesting struggles on which I can blog. I prefer writing to chess anyways, if only because putting pen to paper allows a more controlled expression outlet. My mind is my own fiefdom, but in chess I have to account for the goals of the impresario across from me, or at the other end of a long and winding fiber-optic cable .

This change in perception comes on the heels of my realization that I am near the zenith of where I will go in chess.  Being 1500-something and having an irreverent blog is not the worst one can do in what is, after all, a game. I can almost picture old Semyon from Chekhov’s “In Exile” saying “Everyone should have such a life!”

To fulfill my desire for better games I have been seeking players much higher than my strength. The opponent who pummeled me in this instance had a rating of about 1600 USCF. I am white. 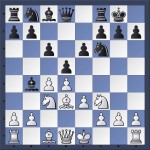 Another Semi-Slav with Bg4. Could this time be different? 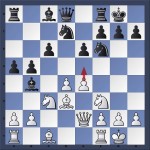