I was all settled in my nice, comfortable chair ready to play everybody’s favorite game. Unfortunately my opponent had the raw temerity to present an interesting  chess puzzle as early as move five. I like the feeling of being certain about a move. The vague uneasiness of not knowing whether you’ve made an error can leave you in a weird limbo state. Some relish being on their own resources but chessboard aplomb is something on which I’m still working.

My opponent played 5…Bb4 in the Semi-Slav. 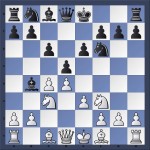 I knew that it was an error. I didn’t get too jubilant though since I didn’t know how to categorize the error or to assess its size. All I could see was of a positional rather than a tactical nature. There were no hanging pieces attacked and black’s king was safe. I knew that dxc4, Bd6, and Be7 are the moves for black while he waits for a bishop move. I needed to know why 5…Bb4 was different. Fortunately I did figure it out after a few minutes. I arrived at my conclusions via some general considerations (in the following examples black is committing the snafu):

a) Some future position, one that we may or may not ever reach, will be at least slightly worse for the second player than if he had not played that move.

b) In certain continuations the error will actually improve the standing of black’s game! The window to punish the move may be wide or it may be narrow, but the results of the improvement could be crushing for white. In the position above white needs to know whether black’s pin is completely crushing. Is he free to guard against it in any particular fashion? Perhaps blocking the pin makes white worse! It isn’t so in this case but your choice to decide whether to parry or ignore the move may prove the the final verdict on whether the initial move ends up as a careless error or a savvy bit of finesse.

c) White must discern whether he has reached case a or case b! Unless white makes this determination accurately he cannot really know the strength of his opponent’s position vis-a-vis chess theory.

d) White must examine the impact of the move in all variations. The first player must calculate trees of moves both with and without the error. Thirdly white must know the ways in which a move can harm a position.

1) The move can block another, more critical piece from getting active

3) The move can result in an uncomfortable pin, x-ray, or skewer

4) The move can abandon a diagonal, file, or rank

7) The movement can affect a key square

This is probably not an exhaustive list. I’d be interested to hear your ideas about how you punish your opponent’s errors. Oh, as it turns out b4 wants to belong to a pawn. If you give Fritz 12 the position above it usually spends another move putting the bishop back to d6 or e7, even without a prompt.