You’ve been playing a tournament game that has dragged on for way too long. You’ve grown weak and weary under unremitting pressure. Black has had you up against the ropes since the opening and seems to be two pawns up, enough so he’ll soon threaten a winning king pawn endgame. Before you congratulate your opponent on a hard-fought win let yourself take one last look at the board, but don’t think about chess while you do it.

Just enjoy what’s happened in the hours and minutes you’ve been exerting yourself. Think of the enormity of what has happened in terms of raw calculation. Look back on the enormity of the content of both your brains and its manifestation over the board. You’ve both had plans, counterplans, counter-counterplans. Probably the ones you discarded could themselves be the subject of a book. Whole campaigns of the flesh and blood variety have been brought to a conclusion with less effort. After all you have done in the name of sport don’t hedge in looking for every last positional resource. Maybe, just maybe, you can find yourself something for the ages.

A.A. Troitzky, maestro of the bizarre and absurd chess endgame puzzle, believed in the power of a last desperate sortie. His quirky and inspirational compositions continue to open up to new possibilities for the chess enthusiast. Today there’s going to be no analysis from Fritz to bail you out. You’re going to solve the problem below on your own, if at all. Call it tough love, call it cruel and unusual, but if you want the answer you’re going to have to find it the old fashioned way. I wrote the other day about the possibility of using generic plans when picking from a multitude of options. This is not one of those times. 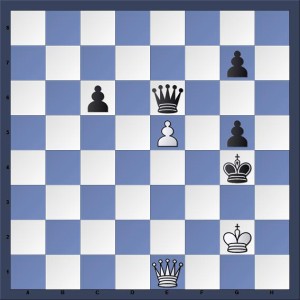