You don’t have to take every juicy pawn or delectable piece your opponent offers you. The old adage “the best way to refute a sacrifice is to accept it”  is only a guideline. Every gambit of your opponent needs to be examined fully, in both positional and tactical terms. Even if your opponent is wrong in giving up material you need to know how to refute his offer. If you can’t find the fly in his ointment don’t take the darned thing! Now I am afflicted with the curse of the pawn hunter myself, and this game is a great example. 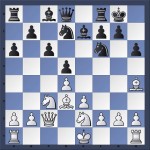 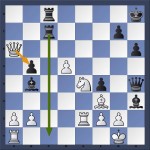 27. gxh3?! Qxh3: I didn’t even consider letting the bishop sit there. As it turns out capturing was objectively the best, but I had no idea how to defend the position that emerged. So in effect I gambled that I could take the piece and survive. Notice how my greed is hurting me again and again. I displaced my queen earlier to nab a rook pawn. This allowed black major piece activity earlier and is the reason he’s still in the game. Now I decide to wing it.