Many players choose to face the Queen’s Indian rather than the Nimzo-Indian, delaying Nc3. I like the strategic positions of the Nimzo and I know I’ll need to learn them anyway; the sooner the better. I’ve picked up David Vigorito’s Challenging the Nimzo-Indian and I am very impressed. I didn’t have to read very far before I found a variation for which to aim; it will be a sort-of road map as I learn the defense. I always start my preparation by learning the theoretical endgames emerging from a particular position. 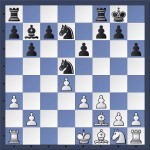 So I plan to play this endgame in correspondence chess until I can become proficient in it. This may seem silly, what’re the chances I’m going to get to this position when it’s fourteen moves deep? Yes, there are other options for black, but the thematic queen trade comes up in lines after 8…c5 as well.

Another reason I’ve chosen this approach is that takes advantage of 4. Qc2, which provides me a way to avoid structural weaknesses. White has some choices about which type of game he wants to play. Black will have to play on my terms and challenge me in an endgame.

Admittedly I’m still developing an understanding of the position. I’m looking at black’s fourth-move alternatives to 4…0-0.  I’m starting with c5 because it is the most common. Here’s what I expect to see a lot:

4. Qc2 c5  5. dxc5 (forced, since white will lose the first-move advantage if he plays defensively, to support his pawn.) 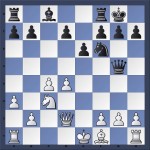 The lines after 4…d5 resemble those of the Ragozin System, which I face as a Queen’s Gambit player. There shouldn’t be anything new there. After learning the main lines I’ll focus on the sidelines. I’ll repeat the same strategy after each subsequent move, with an eye towards favorable endgames. We’ll learn a little bit more in future installments of this series.

3 thoughts on “Working on the Nimzo-Indian Defense: Part One”