This is Gurgenidze versus Spassky, 1959. The opening is the Bird Defense to the Ruy Lopez. I like how Spassky acquits himself here. I’ve made some annotations, since I’m an aficianado of the opening. Spassky is one of my favorite players because it’s rare to see someone so skilled play sidelines not highly regarded by theory.

1. e4 e5 2. Nf3 Nc6 3. Bb5 Nd4 4. Nxd4 exd4 5. O-O c6 6. Be2 {The bishop can
go just about anywhere. I didn’t see this line in the MCO but white still
enjoys an advantage here.} (6. Bc4 h5?! {There is a creative Indonesian master
who plays this move reguarly. I adopted it immediately after looking at his
games. It leads to interesting play. It’s hard for white to get his queen and bishop into
the game. See the picture below.} 7. d3 Bc5 8. Nd2 d5 9. exd5 cxd5 10. Bb5+ Kf8 {Not Bd7 where white just has a superior endgame. This is a position that I reach a lot and like
very much. I like black’s space and the weakness of white’s light square
bishop. An attack on either wing is possible.}) 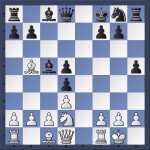 Whether you like my pet line or not, I think we can both agree that the Bird Defense, with its doubled central pawns for black (nearly always), offers imbalances right away. Those of you who follow Silman’s approach to the game may appreciate the clearly drawn lines that the opening creates. Give it a try and let me know how it goes. It’s an interesting theme.