I found a line yesterday that needed to be explored. I’d love to share the results with you of my research into this creative and interesting answer to the Semi-Slav Defense.  Here is the basic position. The solid pawn structure of black is tough to crack. White generally tries either 5 Bg5 if he has years to study all of the complications. He can also use the quieter Meran systems stemming from 5 e3 which lead to a bunch of theory as well. Where is the chess player in all of this? You know, the guy or girl who wants to get down to business. 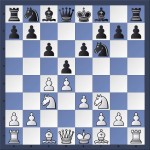 Well, I have your solution but I should offer one note of caution. It’s possible for black to unwittingly sidestep your plan in one of three ways. He can take on c4 immediately. That’s okay because you’re virtually assured a good game if this happens. To capture immediately allows your bishop to get to c4 in one move instead of two (normally it makes a pit stop on d3). This tempo is all your need to have a good chess game with natural moves.

Another idea is to play 5…a6 and declare his or her intention to launch into the Noteboom variation. Black will try to create a rolling pawn mass to smother white’s pieces while gambling that he can ignore his development behind his light-squared fortress. In my experience this plan is rare but we will deal with it in a future post for certain. I recommend playing c5 after a6.

The third idea is if they play the bishop to a slightly inferior square e7. You’ll see that it takes nothing more than a simple move order trick to solve this one. Enough suspense, let’s see the idea: 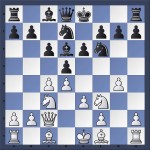 White’s plan is to displace the knight if he is allowed to get in g5 and if the gambit pawn is taken he will have a dangerous open file. Black has many plans and it makes for an interesting struggle with good chances for both sides. Plans are roughly divided into a) parrying the threat b) supporting the knight c) creating counterplay against the loose knight on f3 d) ignoring it and focusing on a plan that begins with dxc4. You can also see that the bishop on e7 offers another potential attacker on the g pawn. I like the finesse Rg1 ahead of the push. Yes, you telegraph it but you should welcome a weakening move like h5. It will give you something to play against. That’s what breaking the Semi-Slav is all about!