I have been reading a book I highly recommend called The Tarrasch Formula. The authors are Sam Palatnik and Mark Ishee. The book contains one overarching motif, reducing the power of the the opponent’s pieces. By diminishing the power of a piece, even if you don’t win it, you create a a virtual material majority. While materially equal in actuality you are playing with an extra attacker and/or defender. If the situation is not rectified this factor is decisive. This idea has presented itself in one of my games from a recent online tournament. Not having known this at the time of the game I fell into a spectacular trap. Even with an extra piece I had few winning chances over the board. 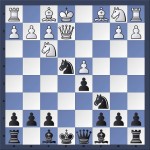 7. Ng5 Nxd4? 8.Qd3 Bb4+ 9. Nc3 Nxg5: This is the most accurate play to way. Black must realize he has a crushing advantage and play accordingly.
10. Qxd4 Bxc3+ 11. Qxc3 Qe7+ 12. Be2 O-O 13. O-O Qxe2 14. Bxg5 Qc4 15. Qg3 Qg4 16. Qe5 f6 17. Qxd5+ Be6 18. Qxb7 Qxg5 19. Rfe1?? Losing on account of the mate threat and the attack on the queen.
19…Qd5? 20.Qxc7 Rfc8 21. Qe7 Re8 22. Qa3 Bf7: I had no clear indication of how to proceed. The greater the space a player possesses the easier it is for him to avoid exchanges.  If white occupies b3 with a pawn and places his rooks on the dark squares of the second rank his fortress is quite resilient. How is black to initiate favorable exchanges in this position? What is the destiny of the lone queenside pawn? Black is probably capable of holding off white’s counterplay long enough to trade it off and give white an isolated pawn. Is this enough? Tarrasch’s formula is in play here, for the inferior side. 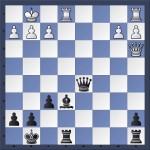 23. Red1 Qe4 24. Qd6! Rad8?! I had no pawn play in the position and I could not find a situation where my extra piece proved beneficial. I consent to the exchange of my two rooks for a queen. I failed in one regard; a chess player must not consider the pieces being exchanged but the pieces that remain on the board afterwards!
25. Qxd8 Rxd8 26.Rxd8+ Be8: White’s plan is to force black to loosen his kingside pawns to get play. A harassment-type defense, with the threat of perpetual check, is effective here. Black does not want to advance his kingside pawns too far because he has inadequate resources to win a pawnless ending. 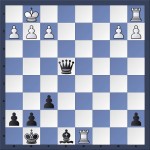 The Bishop is not Enough