The 2012 World Chess Championship will pit the defending champion Viswanathan Anand against challenger Boris Gelfand of Israel. Anand is considered a heavy favorite in May’s Match as he is well on his way to numbering among the all-time greats. The game below is one of all my favorites from the champion. Next time we’ll look at Gelfand’s artistry in the Petroff to see why it is so difficult to win against him with e4.

1. d4 Nf6 2. c4 g6 3. Nc3 d5 4. Nf3 Bg7 5. Qb3: This is the Russian System in the Grunfeld Defense. It’s a port in the storm for those of who prefer a solid, stable system.  The riskier exchange variation (5.dxe Nxd5 6 e4 Nxc3 7 bxc3) followed soon after by black’s c5 thrust makes for a more complex struggle. White gains a lead in development and forces black to abandon a central pawn. Black will eventually get a chance to kick white’s queen around as compensation. After 5…c6 6 cxd white would, depending on the method of black’s recapture, either get an improved Slav Exchange with black’s bishop misplaced, or an Exchange Grunfeld with c5 essentially taking two moves. 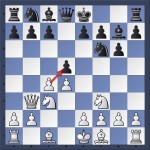 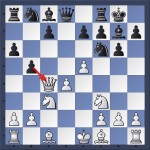 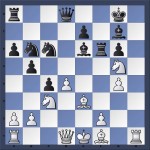 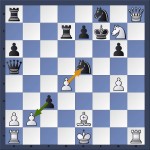 31. O-O+ 1-0: What a flourish! The game ends by castling. Perhaps Svidler, sensing he was lost, played bxc3 allowing his opponent this interesting and rare mating opportunity.