This column idea came to me at the last second. I planned to go with the tried-and-true formula of sharing another mysterious loss. Don’t fret however, as I’m definitely not running out of last-second blunders and violent flurries of exchanges down to losing endgames!

Starting tomorrow I’m going to be begin employing a new training tool. I aim to change my perspective, quite literally by changing chairs. I will play as though I were my opponent, trying to checkmate me. I am not going to look at the board from my side. Naturally this works best with an obliging opponent since not everyone will enjoy you looking over their shoulder. Perhaps they will change seats too.

This is an easy way to train yourself in prophylaxis. If you never get into trouble, the worst you can expect is a pleasant draw. Let’s say my tactics have settled around 1550. On Chesstempo.com, a great site, I’m higher, but I think that’s due to familiarity with the mode of the test rather than overall strength. Can I say that I’m really that strength when often I consider only those moves I intend to make? Isn’t my tactical strength actually closer to a measly three-digit number since I’m using half of my capability?

It’s natural to look more closely at your moves than your opponent’s. Your pieces are nearer, and your pawns face the direction they want to go. The result of all this is a binary, almost Marxist, predisposition to march forward. That is one heavily-refuted theory, sorry Comrades! Don’t just move consistently down the line, heedless of the consequences. Use your opponent’s eyes to direct you.

Do you only see the Spanish opening as black? Take your blinders off and play it from the white side. Can you beat your own plan? A6 here means something very different when you’re white then when you’re black. How are your calculation trees different in evaluating this position from one perspective versus the other?

What happens if you want to learn theory past move twelve or thirteen?  Hardly any GMs use Lasker’s Defense, except as a drawing weapon, and therefore it is not very popular among amateurs. Although I love the positions that emerge I never have had to try to beat it. Perhaps in my first look at it from the white side I will better understand its fragility. I may abandon it all together, or redouble my efforts to make it a mainstay of my repertoire. If I can’t swat it aside as white then it’s safe to assume that my treatment with it as black is deficient in terms of plan quality. I will know what to study and finally accept that I can’t blame old Lasker for putting me into difficulties! 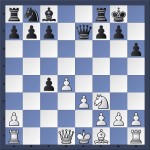 Lasker's Defense to the QGD after 12. dxc4

When you play h3 without a concrete threat in your face it looks like a stodgy, far-reaching idea. What does an unbidden, strange h3 mean to you when you see your opponent forgoing piece development?