I have just returned from my first tournament in some time; I now know how bears must feel after hibernation, having the world-weary sense that the universe is very different, though its problems inexplicably remain the same. I had not trained or practiced since my last tournament, two months before. Nevertheless I had high hopes. I put in a performance rating I’m not going to brag about; I beat an 800, an 1100, lost out of the opening against a 1600, and fell to a 1550 who was flat-out more energetic.

My first two opponents gave away pieces early on, so the games don’t show a high-level of skill. You know those situations, the one who is down material slowly gets ground down. The player who is up material plays safe moves that limit counter play, eschewing complications.

The game that I lost in the opening is fairly instructive, at least for a while. 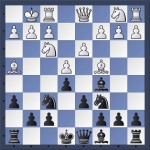 I like this move. Every time I get this position I want to chase the bishop. Finally I tried it. The knight move gives black a clear plan; by exchanging minor pieces black will try to go to an endgame where the bishop  pair matters. Black has also weakened white’s pawn structure. White has a clear plan too. If he takes too long to get organized his dynamic advantage (better piece development) will come to naught. He needs to play with some pep in his step, but unfortunately it’s hard to see the way forward.

This is a cute way to narrow your opponent’s options. He’s going to create pressure, and all you have to do is defend to be slightly better. If your opponent can’t find an attack he’ll have some weaknesses with which to contend. You no longer bear the burden of trying to win. The onus belongs to white, and if he can’t rise to the occasion you’ll have a fine chess game. 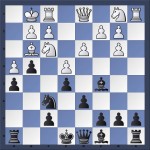 Rather than have to wind through the serpentine paths of opening theory it’s better just to play this solid, forcing line. Black will castle long and use rook pressure along the f-file (after f5). Studying this position will be worthwhile. I expect you can navigate to this point quite often.