I was rereading Beowulf the other day and I found a kenning I really liked. This literary convention, ancient in origin, replaces a single noun with a compound one; arguably the most famous kenning is “whale-road,” meaning the sea. The one that really struck me was for a king, “breaker of rings.” The king of old was first and foremost a patron. He kept his retainers in check with wealth, giving bits of gold from his rings to reward loyalty.

As chess players we understand that our “slow-walker” has got to know his limits. One such situation is in queen endgames. Although there is but one piece to each side, a naked king will usually shift the position’s balance. In skittles chess the other day I saw my opponent erect a defense I could not solve. Now I know its value, but not how to undermine it. Perhaps you will face the same quandary. Examine the pictures provided and comment on your impressions of the positions.

The starting position is below, before my opponent implemented his plan. I’m white. I failed to realize the potency of black getting his pawns on one color (f7, g6, h5) and using his king to protect the weak squares in the formation. He set it up without an issue and I eventually made a strategic error. I did not want to move my own pawns to weaken his position, and tried to rely upon piece play alone. How would you have proceeded? 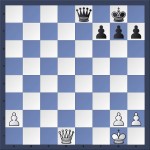 In the diagram below I’ve made progress but don’t know the promotion plan. Once my pawn gets to a7 how do I move my opponent’s queen? By intervening with my pawns and/or king I may set up a check that will allow black’s queen perpetual check. Does white’s king hide (if he can) or participate in the promotion of his pawn? I can’t imagine the latter option would work. 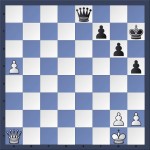 It should be noted that the only pure-queen endgames worth studying involve asymmetrical pawn structures. Had three pawns been on the same side the threat of opposing queens would have made defense a breeze.