I’d like to begin a series which I intend to revisit from time to time about the greatest moves in chess history. Such an idea is possible because of the diligent work of Tim Krabbe and the excellent collection he has assembled. I like the egalitarian nature of this idea; after all if we aren’t blessed with the tactical sight to make a lovely game, or even a combination, we can all make a single amazing move. I’d like to annotate the full games to provide some useful context. Bear in mind that trying to crawl inside the mind of an elite chess player is a task fraught with complications. Even hindsight is not always enough to understand what they calculated.

Without further ado I bring you Nezhmetdinov – Chernikov, Rostov 1962. Nezhmetdinov was a Soviet chess player that was renowned for his fantastic ability to execute combinations. Oleg Chernikov was a fantastic player in his own right. This is their story.

1. e4 c5 2. Nf3 Nc6 3. d4 cxd4 4. Nxd4 g6 5. Nc3 Bg7 6. Be3 Nf6 7. Bc4 O-O 8.
Bb3 Ng4 9. Qxg4 Nxd4 10. Qh4 Qa5 11. O-O Bf6
We have a mainline Sicilian Dragon where the queen always goes to h6 or g4. White has only one central pawn but has a lead in development. The plans are quite laid out. If black doesn’t counterattack on the queen side when white heads for his king then the game is lost. If white fails in his own plans he will be overextended and have a terrible time in the endgame. Nez, as he was known by friends and colleagues, was never that type of player. Fortunately for us this position was about to introduce an immortal novelty. You can guess the move I’m sure when I tell you you can only arrive at it by throwing away everything you’ve ever known about chess. 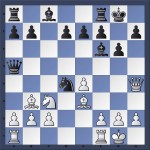