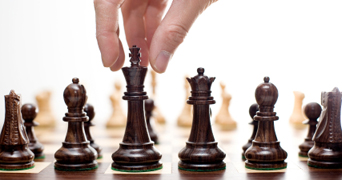 There is a common misconception among many people that you can buy a genuine Staunton chess set. Indeed it’s not uncommon for people to think that there is a chess manufacturer called Staunton who make and sell chess sets. The reality is quite different. Back in the 1800s there was a problem emerging among chess players. The problem was caused by a huge variety in the styles of chess pieces. It meant that a Russian player facing an English opponent might become confused if he cant tell the difference between the pieces. Indeed it was becoming such a problem that the style of set used could affect the outcome of the game.

There was one man, Howard Staunton, who decided enough was enough and that a standardization of chess pieces was needed if the world was going to compete at chess. Staunton was an amazing chess player of his time, indeed between 1843 and 1851 he was considered he finest chess player in the world. Many people believe that Howard Staunton designed the set himself, in fact he must have spent his time improving his chess moves instead.

He did favor one particular set however, which had been designed by Nathaniel Cook, the brother in law of the owner of Jacques of London, a prominent chess manufacturer of the time. Jacques produced the set that Cook designed and it was this set that Staunton so loved. He endorsed this style of set as the standard by which all chess sets should be made in the future. The familiar pieces that we now take for granted as the typical chess set was now set in stone it seemed.

There are still chess sets being made in other ornate styles that bear no resemblance to Cooks design, indeed when one looks at them it easy to get confused about which pieces are which. No such confusion exists when one sees a Staunton chess set. Even a non chess player instantly knows which piece is which.

Jacques of london still make chess sets today, so one could argue that if there is a Staunton company then they are the closest thing to it. Since then many other companies have created amazing versions of Staunton chess pieces. In some cases costing thousands of dollars a set.

There is no doubt that Howard Staunton would be delighted to see what his endorsement has brought about. It seems to be the case that forever more this classic design will remain the standard which we all associate with a proper chess set.