If there’s anyone that makes me appreciate the beauty of chess it’s Jose Raul Capablanca. His style of chess made his games the most accessible of any of the greats. His formula was incredibly simple. Get to a position where you are the only player who knows how to win! His games offer the amateur the clearest path to achievement, calculating well and improving one’s technical prowess. Here’s a game I admire very much. It’s from Capablanca – Rubenstein, Berlin, 1928. Here is the critical position. How would you proceed as white? 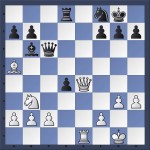 Now, for sure there is more than one way to go here. You might move the queen to avoid an exchange since white’s queen seems better than its counterpart. You might shuffle the pieces around hoping for an error caused by black having to defend the d pawn. Capablanca went for the throat with the simple 22 Qxc6! Can you calculate the position after the forced sequence? Capablanca could and with his strategic vision he knew that the endgame would be pleasant. 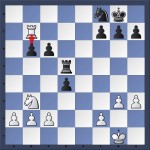 This is the position after 25. Rb7. Both of white’s pieces are extremely well-placed relative to black’s. Capablanca saw the defining feature of the position and headed directly to it. He knew that his winning possibilities actually increased after simplifying the game. 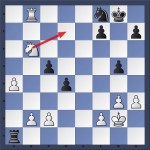 Black obliges white by abandoning the pawn. Of course he had to give it up sooner or later. White is careful not to allow his pieces to become too displaced after grabbing the pawn. Black only regains material equality temporarily. Like a Sherlock Holmes over the chessboard Capablanca was armed with the best weapon anyone could ask for, killer intuition. Hone yours by looking for positions where you can dictate the flow of the game. Why allow wild counterplay if you have other options? The full text of the game is below.