Every tournament player is familiar with the theoretical difficulties of the Ruy Lopez. Due to the sheer volume of preparation necessary, white occasionally runs into a system with which he is unfamiliar. White can easily transpose to quieter lines, usually after an early d3, with play that closely mirrors the quiet lines of the Italian Game and Four Knights. So it might be wise for those who want to defend the Spanish to learn a little about white’s back-up plan. 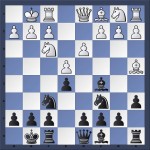 After 7 Nxe5 black does not have any compensation for the pawn. I discussed my game with my opponent afterwards, and we failed to find resources for black. Nxe5 is pretty obvious so why did I allow black to take the pawn?

I evaluated the position incorrectly. I believed that the bishop pair would be worth .3 and my extra development would make up for the pawn. There’s something inherently subjective about the scientific approach to chess; it’s easy to find things to confirm what you’d like to be true. I put myself in a bind here. The extra central pawn is just incredible for white. Evaluating the pawn as worth one was a mistake; it is worth about 1.3. It’s not just a pawn, but a critical offensive and defensive resource.

Better is 6. d6 where black has an Italian Game with a free a6, allowing the bishop to burrow in on a7. The white bishop does not attack f7 and will need to be rerouted, perhaps to c3. The dynamism in normal Spanish positions just isn’t here for white.

The best try is 7. Nc3 b5 8. Bb3 0-0 Bg5 h6 Bh4 Bg4 where it’s tough to make progress. Each sides wants to get rid of its f-pawn and play along the semi-open file. The lack of open files lends itself to minor piece exchanges; the endgames that result from this structure tend to feature the heavy pieces, and thus are pretty forgiving. If black take the knight on f3 he may consider castling on the queen wing, since it will be imperative for him to keep the game closed.

One creative try is to for black to oppose bishops on e6 after white tries to open the f-file. White will either capture and give black an open f-file, or will open a file for black’s queen-wing counter offensive. Only oppose bishops after white has declared his intention to play on the f-file, since otherwise the semi-open a-file is worth more to white than his pawn weakness is to black.

Both sides are headed for a strategic struggle on the wings. Breaking in the center concedes space for the side initiating the exchanges and is generally unwise.