Over the weekend the vultures got into the palace by pecking through the screens on the balcony windows and the flapping of their wings stirred up the stagnant time inside, and at dawn on Monday the city awoke out of its lethargy of centuries with the warm, soft breeze of a great man dead and rotting grandeur –  Gabriel Garcia Marquez

Autumn of the Patriarch focuses on a leader’s last days; his life, once a blend of grand gestures and sensuality, comes to nothing but disorder. A cow holds court from the presidential balcony. The battlefield squalor inside the palace seems to embody the spontaneity of a coup, but even the dead dictator knows that gross misjudgments foreshadowed his difficulty. So regarding this incarnation of your king, what will be the true anatomy of his disaster as you will tell it later? Here’s mine. I’m playing against Justin Armstrong, 1670 USCF, in a Game 60. I am white and the text is below. 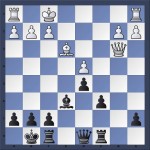 The Autumn of my Patriarch

There is some good news though. Like the composite rulers in the novel, the king seems to embody eternity, so does he rise from the box without wound or memory.